On episode 2 of Rock Rods we head to the Annual Crawl Rally event at Windrock ORV Park for some Rock Racing Action. The guys cut a brand new windrock bounty hill and have put up $5000.00 for the fastest Rock Bouncer out the top. The hill starts out with a 6 foot jump and is steep and loose all the way up to a near vertical rock ledge where you have to narrowly shoot between two trees then it flattens out to give you just enough time to get back in the throttle and jump the last 10 foot tall dirt ledge and out the finish line.

Selvey Vittitoe was first up on the hill. He left the starting line hard with the v-treads on his Treetremmor 2 buggy digging for traction but the hill was just too loose and steep as he timed out. Ethan Spegal was up next in his Turbo 383 powered Showstopper Buggy. He hammered on the throttle letting the boost drive his wheels but his 43 SX stickies just couldn’t find the traction to carry him out the top. Brandon Dillon jumped the first ledge in his Ford Buggy and broke on landing. Woody was up next and he put his rear steer rig to work bouncing off the rev limiter all the way to the first ledge where he almost rolled. Wes Kean made multiple full throttle assaults on the hill and set a new high mark to beat on the first ledge. Jamie Whitaker matched the mark with his Ford powered rock bouncer. Next up a Turbo Subaru powered 4wd rail buggy jumped up towards the top of the big ledge and rolled back down landing on its side and needed recovery. Little Tim Bacon was next up in his Rowdy Big Block powered buggy and set a new high mark on the first ledge the rolled it on his second attempt. Bobby Tanner was next up as he came in too hot rolling his Screaming Blue Buggy before getting to the ledge but made a great save. He made one final pass saving a roll at the top only to roll on his way back down to the bottom. This so called race hill quickly became the Windrock Bounty Hill. Over the course of the day we saw a ton of failed attempts and rollovers. None of which were as violent as Bubba Bacon’s cartwheel where he flew 20 feet up in the air before coming to rest on a tree at the bottom of the hill. He was taken to the hospital but suffered only minor injuries. Travis Lovett and Richie Keith also had some nasty rollovers. In the end only one driver was able to conquer this climb and that was Tim Cameron. He jumped up the first ledge where he did a series of deafening neutral drops with the rear steer at full lock until his Showtime 2.0 buggy finally clawed its way up. He then matted the gas and aired it out over the finish line finishing off one insane run. The let a select few drivers that were still together take a second run at the hill to no avail. Tim Cameron took home the money and from the looks of the hill it might never be climbed again.

Check out Rock Rods Episode 1 where we hit Rush Off Road Park. 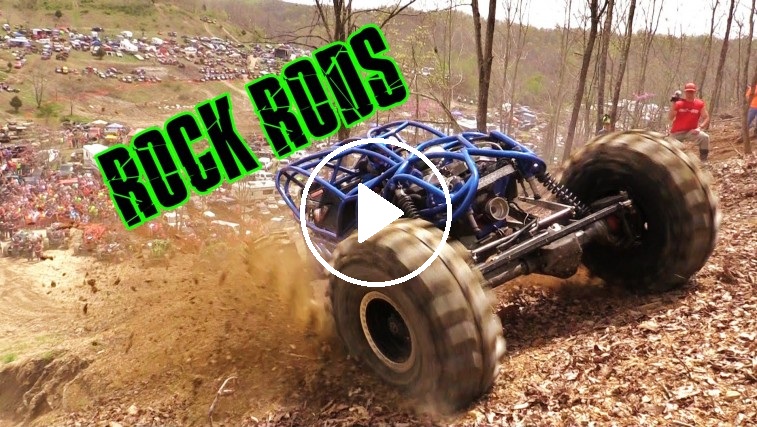