We have seen some Big Jumps in our years of filming Mega Trucks but nothing quite like this. The crazy folks at Dennis Anderson’s Muddy Motorsports park built a huge ski jump looking ramp of dirt in the middle of their arena. They then told a few brave drivers to have at it and see if they could claim the World Record Mega Truck Jump. Scott Green and the Sail Truck which we have seen all over YouTube going huge didn’t even want to hit it. We figured no one would hit it after that.

Leave it to Jimmy Durr to be the first one to step up to the plate in his FTL Mega Mud Truck. He didn’t even pull up to the ramp to feel it out. Durr came in full bore on the gas in 2wd because his front end was broke and launched it! He landed it hard casing the landing and sending the rear end of the truck up in the air. He stayed steady in the gas as the rear tire returned back to the soil. This didn’t phase Jimmy he just continued into a full blown freestyle with an obviously broken truck. The run was finished off by standing the truck up on the tailgate at the backflip ramp to the roar of cheering fans. He had the record.

Chris Papa Goes for the Record

Well Chris Papa had other plans on the Fueled by Haters truck. He lined up to hit the dirt ramp aiming to beat Jimmy’s jump. Then made a quick lap around the track before backing his mega truck up to the fence in preparation of sending it. Chris hit the throttle and off he went with more speed than the other truck. He nails the ramp and gets some of the biggest air we have ever seen out of a truck landing a good truck length further and taking the record. The crazy guy then proceeded to finish out the run with a torn up truck all before skidding over to the side of the track and jumping out to a standing ovation. Chris Papa was the new world Record Mega Truck Jump holder.

If you want to see more insane Mega Mud Truck videos be sure to check out the Busted Knuckle Video Youtube Channel and Subscribe! 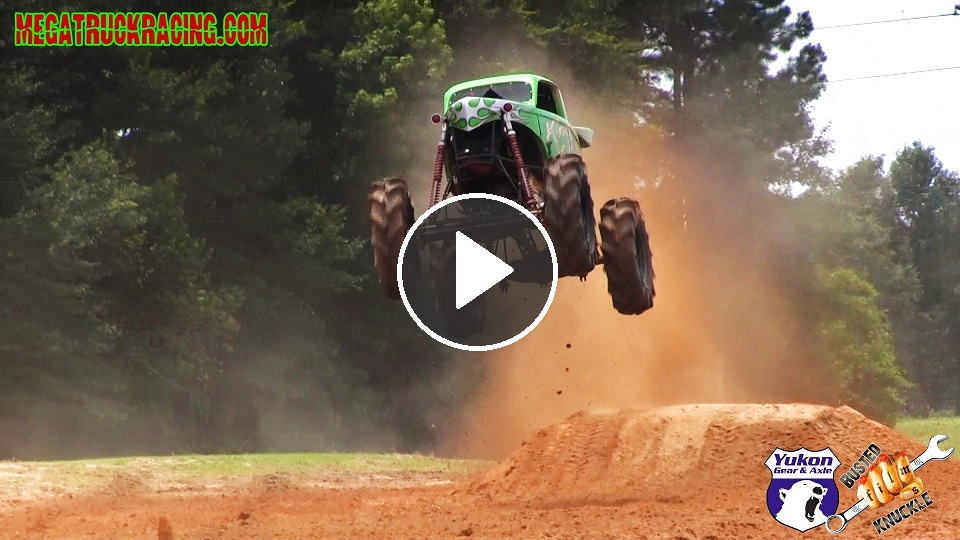 Next Up watch Dennis Anderson go Big in King Sling