If you follow the world of Rock Bouncing then you have probably heard of Bobby Tanner. He is said to be the godfather of the sport. His run up the Viagra waterfall in Disney, Oklahoma was one of our first viral videos. His Screaming Blue Rock Rod is one of the most well know off road vehicles on the planet. Well this time we have another viral video with Bobby Tanner behind the wheel and it is just as amazing as the first.

Big Meats Run is the name of the event held every March in Disney, Oklahoma. Off-roaders come from all over to test their vehicles on this one of a kind terrain. The riding area is an overflow for the local lake. The rocks have a ton of traction thanks to the shells and sand mixed into them. This allows drivers like Bobby Tanner to go up some pretty Nasty Climbs.

The Right side of Viagra

Just to the right of the infamous Viagra waterfall obstacle is a near vertical rock face. People have some other names for these but we will just call it the right side for this article. We were filming some Jeeps and rock crawlers attempt Viagra when Bobby Tanner Showed up. He eased down the waterfall and set his sites on the steep climb to just to right of it. Bobby lined up Screaming Blue up at the bottom of the hill and readied for take off. He eased up the climb until the tires broke traction feeling out his line before he backed back up. With one quick stab of the throttle he was off and bounced right up the rock wall.

That line seemed to be too easy. Bobby Tanner once again returned to the bottom of the rock climb. He lined up just to the left of his previous climb where it got just a bit steeper. This new route would prove to be much more of a challenge thanks to the many rock stair step ledges. Mr. Tanner chose his line and stabbed the gas. The 383 stroker motor came to life as it propelled the buggy forward. The rock ledges bounced all four tires off of the ground multiple times. Bobby just stayed in the gas never losing momentum as he made it out the top with ease.

Subscribe to the Busted Knuckle Video Youtube Channel so you can keep up with Bobby Tanner and many more of the best drivers in Rock Bouncing. Be sure to check out the video below to see Bobby Tanner’s Legendary Run up Viagra. 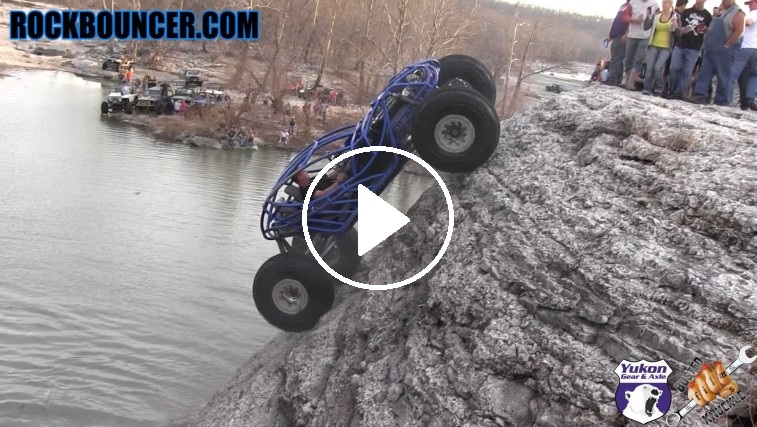