On Rock Rods episode 97 we are taking you to Dirty Turtle Offroad Park in Bedford, Kentucky for the Pro Rock Racing 2020 season opener. Here some of the baddest Rock Bouncers in the country will be going all out up some muddy hill climb racing courses to see who is the fastest. Who will take the win today? Will it be Tim Cameron in his new Menace Buggy? Maybe Bubba Bacon or even Josh Parish Outlaw 2 for the win? It’s anyone’s game and this course will not be easy.

It never ceases to amaze me the evolution of these rock bouncers. Each and every year they just get more and more capable. This same course denied most of the field last season and this time just about every driver made it up the hardest wall at the bottom of the hill climb. The crazier part is as the drivers made their second run at night they just got faster and faster. Now this can be due to a multitude of things. With each run the course was getting more traction as it was drying up. Then again maybe the drivers just got a good feel for the course and that made them faster. 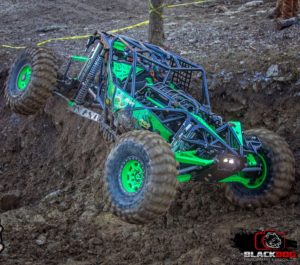 took the win. That driver was none other than Tim Cameron in his IFS Menace rock bouncer. He made some wicked fast passes with Josh Parrish in the Outlaw 2 nipping at his heels. The times were very close as these guys are all super competitive. Pro Rock Racing Dirty Turtle was a good event with some fast challenging rock bouncer racing courses. Let us know what you think in the comments.