We took the trip up to Dirty Nasty Off Road Park in Morehead, Kentucky for their Extreme Barbie Jeep Race. This is a fairly new park that is not afraid to get out the heavy equipment to make a good course. They made a nice s-curve style dirt course  that ended with a steep hill and bales of hay to slow us down before running through the crowd. It could have been a bit steeper but worked well for the first timers and the crowd loved the action. I brought my trusty Gator for this race. It has won the last two events I raced it in. I made it through round 1 with ease. The semi Finals consisted of two sets of 3 riders running. I won that round as well and went into the Finals against a guy on a pink FJ cruiser. It was obviously very fast. I caught him sleeping at the start line and got out ahead of him and that is where he stayed all the way to the finish line. Busted Knuckle Wins Again! I took home $100 cash and 2nd place took home $50 cash. Not bad for a race that cost almost nothing. Unfortunately my trusty gator has seen its last race. I noticed one of the front A-arms was cracked so I let someone destroy it with one final run down the hill. If anyone has a Gator they want to get rid of Ill take it! The Next Race is Thanksgiving weekend in Heflin, Alabama at Morris Mountain ORV. Come on out and give it a go!

Check out The Finals Race from 2014 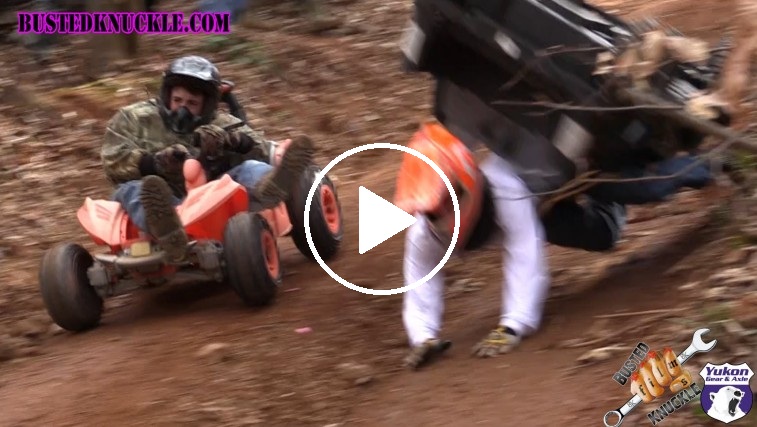