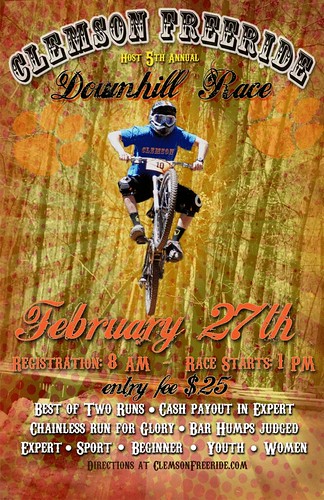 At Busted Knuckle Films we don’t just cover 4×4 Offroad events. If it gets your adrenaline flowing and has a likelihood of bodily injury you better believe we will be there to film and partake in the shenanigans. After all we are just a bunch of camera carrying adrenaline Junkies. The Clemson Freeride Downhill Race takes place just a few miles from the Clemson University campus in South Carolina. It is a Downhill Freeride course set up with various wooden and dirt obstacles. Racers are arranged into classes from youth to expert and judged by time. I myself even took some time away from behind the camera and raced the beginner class on my Specialized Pitch Mountainbike. Here is an account of the race from my own perspective. I almost forgot what competition was like. It is something that is in our DNA we all want to compete. We compete in everything growing up only to let it go by the wayside later in life. I thought all that pedaling wore me out when I was making my practice runs…..It was 10times worse when I got to the starting line. As the official began counting me down from 30seconds. My heart started the race way before I did. It pounded faster and faster the closer it got 5,4,3,2,1 GO!, I was off pedaling as hard as I could to the first obstacle. I cleared the double I had been having issues with during practice with no problem and was off to the next obstacle. I soared over the next jump with my heart pounding 90 miles an hour. As I leaned into the first high berm I could hear the crowd cheering PEDAL PEDAL PEDAL!!. I went into straight adrenaline mode ripping through the next berm almost getting parallel with the ground as I leaned in to it. I sailed over the next table top and did a little bar tweak for show, that only made the crowd louder. I railed the next turn and was off to the wall. I hit the wall with all my speed and no thought of tapping the brakes. I hit the transition and before I knew it I was on a perfect line in the center of the wall hugging the turn like a nascar. I tapped my brakes for the first time when I hit the hairpin turn as the crowd once again shouted to Pedal. I was gassed at this point with a small uphill section and tight technical section in front of me. I pedaled through it all and launched off the A-frame into the only major uphill of the course. The suspension of the bike sunk down as I hit the bottom of the hill and shot up the other side. I came around the next turn pedaling with everything I had. I bypassed the road gap jump to save time and not risk casing it. I leaned back on the seat and readied myself for the two rockgardens lurking at the bottom of the course. I ripped through them on the edge of being out of control and shot down the wooden stepdown. As I came around the last corner I could see the finish line with the people cheering and the Cowbell sending me into a high that only racing can give you. I steered across the bridge and through the finish line. I had made it through my 1st run of my 1st race EVER and I hadnt made a single mistake. My second run went much the same with me picking up a little speed in a few spots. I was on cloud nine and got more air on the table tops that I thought I ever could. As I meandered my way through the final rock garden I lost control and the bike came out from underneath me. It happened so fast I don’t even know what I did to make the bike loose its grip. As the dust began to clear I could hear the crowd cheering louder than I had heard them the entire race. They were telling me to FINISH. As I gathered myself and quickly threw myself back on the bike I noticed my right hand was completely numb. I was too pumped to feel any pain so I just gunned it down the remainder of the course and across the finish line. This is Gravity Racing at its best. The crowd cheering, the cowbell ringing, the feeling when the official says GO, and the feeling of accomplishment when you cross the finish line for the very first time. I finished 2nd only 1.2 seconds behind 1st place. I guess I should have pedaled harder. But that didn’t matter to me. I had found something I had lost along time ago. The feel of a real competition. Now that I remember that feeling I AM HOOKED. When is the next race!?! If you have an event like this that you would like us to cover feel free to contact us. BKF can Film, Photograph and make a professional DVD of your event. An event DVD is a great way to get more racers signing up for your next event. Busted Knuckle Films  can also make a short highlight real that you can post on your website or to youtube. A highlight real can be a very effective tool for attracting sponsors to your next event.[nggallery id=1]