What could be better than hand fabricated vehicles barreling down dirt roads at speeds in excess of 100 miles per hour only to slam on the brakes and drop it into low range in order to throttle up the most hardcore of rock obstacles. This is Endurance style Rock Racing at its best. This is King of the Hammers. Qualifying for this World Series of Endurance Rock Racing is no easy task. People travel from all over the United States & even Canada to the various qualifier races to try their luck at making it to the big race in California. Arguably the most difficult of these races is the qualifier that takes place in the black mountains of Kentucky.

The day before the race was a disappointing one. KOH qualifier hopefuls Rusty & Fish were scouting out the course in a Jimmy’s 4×4 rig they had borrowed from Derick West when it suddenly went up in flames. Here is Rusty’s own account of the incident:

Fish and I got to Harlan and teched in. We decided to prerun with Stan and we were checking out most of the course. We decided to bypass all the hard obstacles and just learn the course. About 7-8 miles in, Fish and I looked at each other and both said we smelled fuel bad! I immediately stopped the rig and as soon as I hit 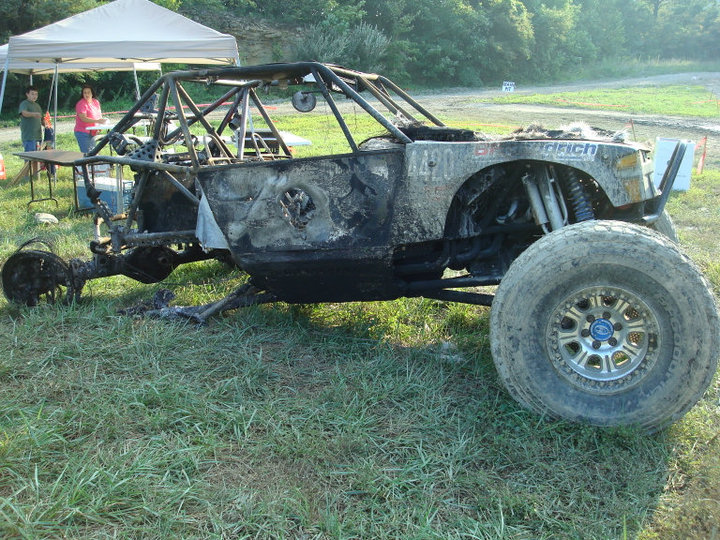 park, The cab just completely went up in flames on my side. I’ve never had a fire ignite and get that large in 2-3 seconds. We were trying to get out and I went to turn the kill switch and the plastic knob had alreadt melted and the lanyard fell off. I fought the harnesses for what seemed like 30 seconds but was probably 5-10 seconds. The fire was as high as my chest at this point. I got the harness undone and jumped out to the ground. We started trying to get the fire extinguishers off and sprayed everything we had at it but it just kept getting bigger. I have never felt so helpless in my life!

Rusty suffered some second degree burns but is recovering well. He even took the time to wish all of his competitors good luck in the race. They are asking for the help of some sponsors to help get this rig put back together. Help pitch in if you can! 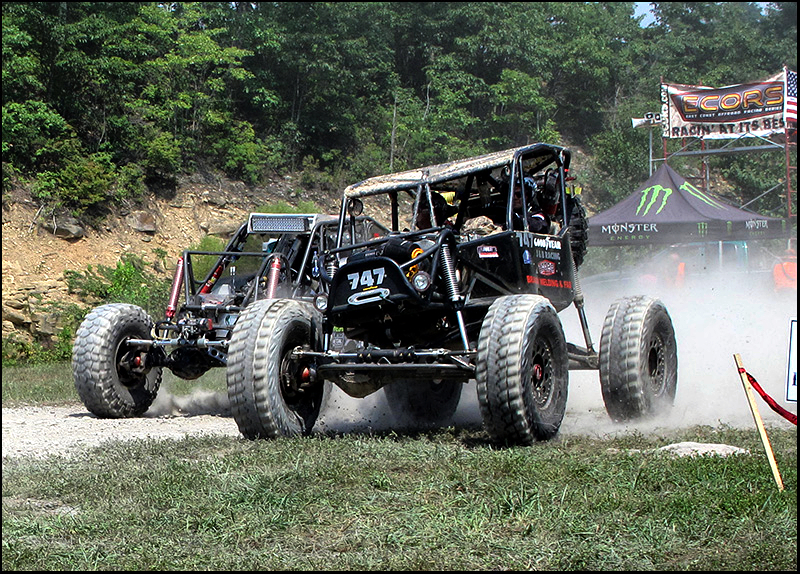 After pre-running the course the teams had no doubt that this was going to be their most difficult KOH qualifier race yet. The race started around 2:30 pm as the sound of roaring motors echoed through the valley. Racers started 2 at a time in 30 second intervals. It was an all out drag race to the first turn. Once the drivers made it to trail 10 they barreled down this access road with speeds in excess of 65MPH only to slow down and hang a right up into the woods. The teams had to make the steep descent down Your Turn. The racers also had to go down Under Estimated. The Essentially Offroad buggy got their race off to an interesting start by rolling 2.5 times down this obstacle  resulting in a DNF.  No worries though at least this time they didn’t lose the 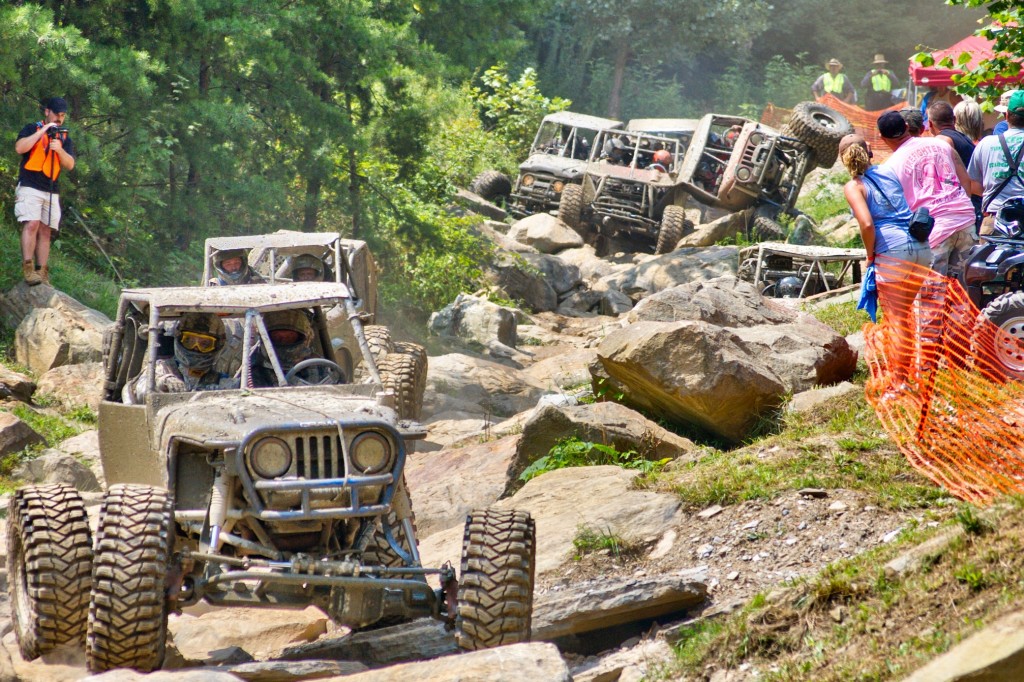 spare tire. Next the brave throttle jockeys had to work their way down Lower Rock Garden and Little Jagger. There was a huge traffic jam in this area after a random UTV was encountered on the race course trail upside down. The traffic jam resulted in some creative passing and a few flops. Next on this brutal course was a trip up waterfall and Rail Bed. The BTF car and Fred Hills car both rolled on this nasty ledge. Seeing 3 or more rigs battle for the perfect line was a common occurrence at this spot. If you were lucky enough to survive the first half of the course the second

half was equally as brutal. Teams had to make it up Intimidator, Grape Vine, & Middle Rock Garden before cutting across the mountain and racing back towards camp. Before they got back to camp they had to toss their rigs down Profanity and back up Rodgers Ridge or the optional bypass. The course was topped off with a trip down into the valley and back up White

Tail Crawl and into the pits. Wow and this is only the first of 5 laps. 21 vehicles started the race and only 10 of these made it to lap 2. Team Adam was out with a busted Trans, they did however grab a spare car only to blow 2 tires on it before making it through another lap. I mean I know most people carry spare parts but a spare race car?  The underdog XJ yes thats right an XJ competed and was passing some of the full blown buggies until they blew a rear shaft on waterfall that eventually made them DNF.  Todd Pucket stopped and borrowed a 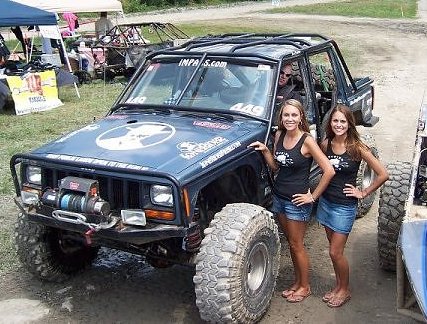 u-joint from the still fallen EOR race crew at the bottom of Under Estimated. This show of true sportsmanship led to a 2nd place finish and a spot at the King of the Hammers Race in February for the team. P.J. in the M&M buggy said it best “By the time we started the last lap it was dark. We looked at each other and agreed one thing. Lets have fun, so we cranked up the radio, turned on the rock lights and the last lap was a like old times for us, a night run in Harlan. We finished the race and had fun while doing it “. They Finished in 4th Place. #99s Co-Driver got sick and started throwing up on Middle Rock Garden around lap 3 so a new co driver was swapped in for lap 4. Lap 5 had them in 4th place until they stopped to straight wire a headlight to the rig since dark was fast approaching. They pulled into a cheering campground to finish in 5th place at 9:40 pm. Wow what a race! Only 5 of the 21 teams finished the race. Brutal doesnt even describe this course.

This was my first KOH qualifier race experience. If seeing this race doesnt have you wanting to build a car and go beat on it for 50 plus miles then you are in the wrong place. I couldnt believe the sportsmanship involved in this race. Teams were sending parts back to other teams that were stranded on competing race cars. People even took parts off of their own rig just to give a racer an extra chance at winning. I saw atleast 4 rigs that stopped at waterfall and tried to help the flopped BTF car get uprighted.This made me proud to be a member of the offroad community.

Want to Re-Live all the action and the Carnage? Check out the official Harlan KOH Qualifier DVD by Busted Knuckle Films. It is available for preorder now and will ship in September. Watch for the trailer to be up very soon!

We have sponsor spots available for the DVD cover which includes a 30 second commercial at the end. Contact Us for Details.

Big thanks to Ron & Rob of East Coast Offroad Racing Series for putting on a great race, the teams that put their heart and soul into these rigs only to beat on them for over 50 miles of the worst terrain imaginable, and for Busted Knuckle Crew for hanging in their and making the DVD possible.

See yall at the next one,