Doing a Burnout in front of a Cop.

The guys at CSC Fabrication in Cave Springs, Georgia came to us in need of some marketing help. The owner Labronn Osborne was building his own Rock Rod and wanted to do a cool video to unveil it to the world and show off his Fab Skills at the same time. We took on the task of creating a viral video of the then unnamed rig. We showed up early one weekday morning as they were putting the finishing touches on the build. Labronn asked me what I had come up with. I said how about doing a burnout in front of a cop? He was all about it. Lucky for us the fine city of Cave Springs had just received a brand new Dodge Charger. Being a small town with only one red light Labronn took off to the police station to see if they could help us out. It never hurts to ask…. Right? The cops at the local police station were thrilled and the shoot was on. We started the shoot with the buggy driving through that one lonely red light with the loud exhaust shaking the windows of the local corner restaurant. Of course Cave Springs finest is sitting there waiting turns on their blue lights and gives chase. The chase heads quickly through town and down a backroad near the CSC shop. Here is where things get interesting as Labronn stops in the middle of the road making it seem like he is giving up. Before the cop can get out of his car The built LS2 lights up the 43″ rear tires into a cloud of smoke and they were off again heading out of sight. We decided to name the new Buggy “Outlaw” and the Video “Outlaw Buggy Hot Pursuit” The video got a ton of attention as it was really the first purposely shot viral video for the rock bouncing marketplace. With attention came a ton of haters. All in all the guys at CSC Fab were stoked on the video and so were we. So much that we also used it for the intro to Rock Rods 4 the Movie that can be purchased on itunes or on DVD in the Busted Knuckle Online Store.

If you like burnouts check out this Chained All Wheel Drive Burnout we did. 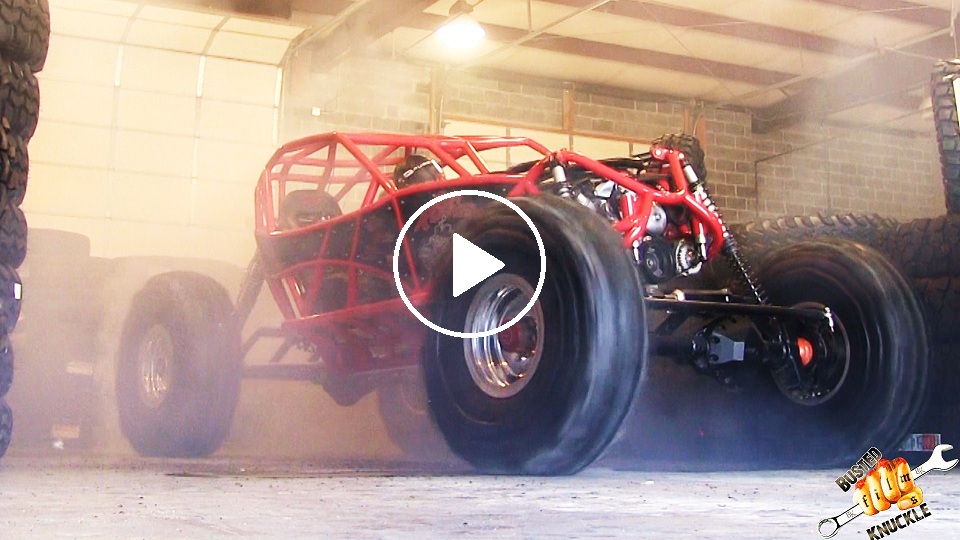